The Box Office Drop 96% Compared To The Previous Year

In the box office’s weekend tally, the revenue has shockingly dropped 96% compared to last year’s collection. The cinemas’ critical state is constantly worrying the filmmakers, producers, and the theater’s owners during this COVID-19 pandemic. 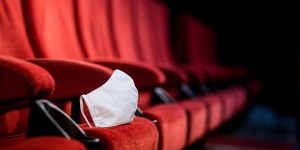 However, not all the cinemas and theaters chain has reached a point to shut down.
Some have bravely fought against the hard times and faced all the restrictions along the way. There are many reasons behind the poor performances of the cinemas. The global pandemic audience is not turning up to the theaters in a significant number as it used to. The studios and production houses have changed their distribution model, realizing the cinemas’ low potential right now. The theatres have already been facing many challenges, and suddenly, Warner Bros. studio has announced a new release model a week back. In the release model, Warner Bros. would release some of its blockbuster films on HBO Max and in theatres on the same day. Many industry critics have criticized the decision while the studio is arguing that it is a short-term plan.

Although the new tally of the theatres makes it more straightforward that the livelihood of theaters is at high stake, it may affect the industry in the long run. A Tweet updates the latest box office status on the official account of the editor of Box Office Guru Gitesh Pandya. The tweet revealed that only ten domestic theatres managed to collect a gross of $5 million over the weekends. Last year, he mentioned the collection was around $110.4 million and about $101.5 million before that year. The tally shows that the drop in the box office’s revenue is around 96% to 95%, respectively. The current gross revenue depicts nine of the top ten movies collecting less than $400 per theater.

Many are not very shocked about the collection as the drop was expected due to the lockdown and pandemic. Still, the recent tally of the collection is an eye-opener to the audience and the industry people that soon some actions are needed to take; otherwise, the coronavirus pandemic could do some severe damage to the industry.

Many arguments surrounding theatres are dead format, and the studios are looking for some rearrangement of the distribution model- much like the famous studio, Warner Bros. has done. However, real cinematic experiences can only be enjoyed in the cinemas, and theaters are the heart of film watching. Hence to give up on that would end the rich history of filmmaking.

According to the recent news, the researchers have created the COVID vaccine, which has brought some hope to the world that soon people could lead normal lives. However, the exact time needed to vaccinate the whole population is still not known. Until that, all we can hope that cinemas can hold up a little longer- a difficult task to ask for.

Stephanie Ellison is an energetic specialized blogger, a magazine patron, a distributor of aides at webroot.com/safe, and an expert digital protection examiner. Through her composition, she plans to educate people about the perils and dangers prowling in the digital world.

1. All You Need To Know About The Season One Of Idhun Chronicles On Netflix
Author: Blanche Harris

3. Kevin Feige Has Confirmed That The Infamous “the Blip” Will Not Be A Pivotal Part Of The Mcu
Author: Elisa Wilson

4. Did You See The Set Photos Of The Chris Hemsworth Starrer “thor: Love And Thunder”?
Author: Elisa Wilson

6. 5 Ways How The New Batman Will Be Like The Dark Knight Trilogy
Author: Mildred Kawakami

8. These Are The Best Manchester Based Movies You Can Watch Today
Author: Jack thomson