Here’s How You Can Unlock Every Character And New World In Yu-gi-oh! Duel Links

Based on Yu-Gi-Oh! Trading Card Game, Yu-Gi-Oh! Duel Links is a free to play card game for Android, iOS and Windows platforms developed by Konami. The characters on the Duel Links are adopted from Yu-Gi-Oh! Duel Monsters anime. The virtual reality “Duel World” created by Seto Kaiba brings the best duelists together in order to make them compete with each other. The players have the option to choose between Seto Kaiba and Yami Yugi to begin their journey. Once they have selected one character and start winning duels, they can unlock more characters. Source:https://legit-directory.uk.com/blog/heres-how-you-can-unlock-every-character-and-new-world-in-yu-gi-oh-duel-links/With the arrival of a new epoch in Yu-Gi-Oh! Duel Links introduced new characters, Xyz mechanic and a lot more.
The mobile game has undergone a significant shift in its status quo as the Zexal world is introduced in Duel Links. There are now three extra characters that need to be unlocked in order to get more cards, gems and other stuff. To make the task of duelists of the Xyz focused decks easier, the in-game shop now has a new box and structure deck. Every Yu-Gi-Oh fan must at least once try Xyz summons in Duel Links, it’s relatively easy to do, and there are also tutorials to help you with that. 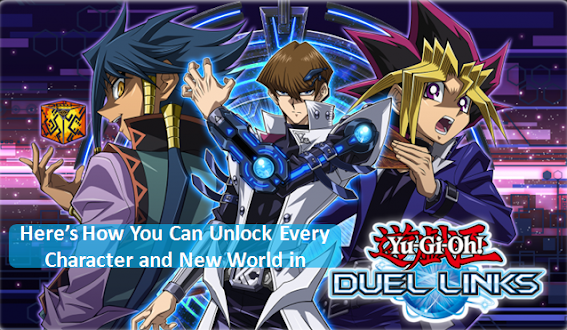 Unlocking the Zexal World in Duel LinksThe mobile game informs the duelists how they can unlock the Zexal world in the Duel Links once they have entered the game, so it’s pretty simple. All one has to do is to use two level 4 monsters in the same duel, and that’s all. Yuma, the Zexal’s protagonist, uses this quite often when he Xyz Summons Utopia. After one is done with the above tasks, Zexal world unlocks. Unlocking Zexal World Characters There are a total of three characters to be unlocked in the Duel Links Zexal World. Yuma and Astral have unlocked automatically when one opens the Zexal World. At the same time, one needs to complete specific tasks to raise Stage Level in order to unlock the other two characters. We have compiled the lists of the tasks to complete to unlock each character. Yuma and Astral – Just unlock the Zexal world as mentioned above, both of these characters will be automatically unlocked. Bronk Stone – After Reaching Level 6 complete the tasks listed below to unlock the character.While playing as Yuma and Astral defeat Bronk Stone in 1 duel.The Warrior type Monsters must be summoned at least five times.Do Xyz SummonsTori Meadows – Reach Level 10 and just defeat Tori Meadows in a duel. That’s all, by performing the above tasks you will be able to unlock all the characters in Duel Links Zexal World.

2. When Will The Wolf Among Us 2 Will Be Released?
Author: Jack thomson

4. What Is Kalyan Matka? How Is It Being Played In India?
Author: Ronald

5. Why And How Do People Play Satta Matka Online?
Author: Ronald

6. Most Popular Online Game In India, Which Gets You Real Money
Author: Ronald

8. Insight Of Satta Matka – What Is This Game All About?
Author: r

9. What Is Satta Matka? Its Origin And Progression In India
Author: Ronald

11. Satta – A Word That Carries Both Positive And Negative Feeling Amongst People
Author: Ronald

12. How Satta Matka Can Help You Achieve Your Dreams?
Author: Ronald

13. How To Win Big In Satta Matka With Little Efforts?
Author: Ronald