“No Time to Die,” a final straw in Daniel Craig’s most outstanding work of his career, has now revealed a new trailer with some breathtaking images.After the pandemic tore apart all plans to release No Time to Die in April, the fall tentpole has now been set for November the 20th release, which is not much later than Black Widow debut, so a neck and neck competition is expected.Not the perfect time to bid adieu to one of the most beloved actors to have ever donned the suit for 007, but it is time nonetheless. With the “Tenet” opening with substantial numbers all over the world, we can hope “No Time to Die” will also receive no hindrance in November and will be able to garner strong numbers at the box office.However, the expectation will be high and with its second trailer having dropped on September the 3rd, the spotlight is really on 007.The fifth and final film of the franchise will finally make Daniel Craig rest after years and years of physical strain that the 007 character brought in his life. After blockbusters like Casino Royale, Quantum of Solace, Skyfall, and Spectre, Daniel Craig will be playing ...
... the role of James Bond for one final time in No time to Die.But will it be the best film among all? That only time can tell, but the footage in the trailer does make us expect for an equally engaging thriller if not something better.The official synopsis of the film gives us some idea about the plot. The synopsis says that 007 has left the M16 program and is enjoying his rare time of serenity in Jamaica. His old friend Felix Leiter turns up and asks him to set foot on a mission to rescue a scientist who has been kidnapped. The mission brings Bond face to face with one of the dangerous villains he has ever faced, who is also in possession of technology mankind has never seen before.The ensemble cast of No Time to Die includes some old faces and also the new ones. Lea Seydoux, Jeffrey Wright, Ben Wishaw, Ralph Fiennes, and Naomie Harris, and Christopher Waltz are the old actors who will be returning to reprise their roles in Daniel Craig’s final James Bond movie.One of the most prominent inclusions is the recent Academy Award winner Rami Malek (known for Bohemian Rhapsody and Mr. Robot), who will be the central villain of the film.Lashana Lynch of Captain Marvel fame is also a part of the film.Christopher Waltz, however, will appear in the film only for a solo scene. 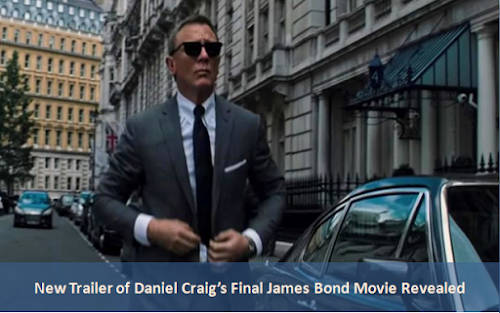 A director of rare virtuosity Cary Fukunaga has helmed the direction of the film. Fukunaga is known for directing Sin Nombre, Beasts of No Nation, and mega-hit HBO show True Detective. For True Detective season 1, he had bagged the Primetime Emmy Award for Outstanding Director for a Drama Series.The shooting and post-production are already complete since the film was already gearing up for April release.Fukunaga decided not to alter things anymore in the post-production even though he had time after April. Fukunaga explained this by saying that it would have cost more money, and now he just expects everyone to like the film as he feels that his job is done.The rumor has it that after Daniel Craig, Tom Hiddleston, Tom Hardy, Richard Madden, Idris Elba, and Peaky Blinders star Cillian Murphy have been pitched as the next superstar to don the suit for 007 character.Christopher Nolan has also brushed off all rumors to direct a 007 film since he believes the franchise is doing quite wonderfully without him. The second trailer, filled with action-packed scenes and breathtaking dialogues, is available on YouTube. The film No Time to Die will be arriving in theaters on November the 20th, 2020.Cynthia Strickland is a innovative individual who has been writing blogs and articles about cybersecurity. She writes about the modern updates involving office.com/setup and how it can enhance the work journey of users. Her articles have been posted in many famous e-magazines, blogs, and websites.Source:https://aofficeus.com/new-trailer-of-daniel-craigs-final-james-bond-movie-revealed/