Pathfinder Vs Dungeons & Dragons: Which One Is For You?

When you think of famous RPG fantasy tabletop games, Pathfinder and Dungeons & Dragons are the first in your mind. While this automatically reflects how good these games are, it might also confuse you about which one you should choose.

Among all the fantasy games, over the years, Dungeons & Dragons have won many hearts. The game was released more than 40 years ago to offer players of the world the chance to witness their fantasy dreams with simple calculations and dice rolling.

During 2008, the game’s fourth edition started receiving very mixed reviews. That is when Paizo Publishings came out with Pathfinder, which is hugely founded on the third season of Dungeons & Dragons as this was the most successful season of the game. These two games have gained popularity over the years and have also released their sequels— Pathfinder Second Edition and Dungeons ...
... & Dragons Fifth Edition. If you are starting with RPG games, then you might be confused between these two. Here is a classification of these two games which will help you decide which one you should go for.

The fourth edition of Dungeons & Dragons made various changes into the game and its mechanics, which hugely disappointed the fans. For a long time, fans continued wishing for any update and revival of the older mechanics of the game, but it did not happen.

Leveraging the scenario, Pathfinder was released with similar mechanics as it was in 3.5 and eased many different aspects of the game, thereby incorporating massive customizations and complexity. This made Pathfinder a right combination of the complexity gamers wanted and the mechanics they wished for. In fact, it’s sale was even more than the fourth edition of Dungeons & Dragons.

This is because Pathfinders knew that fans like the previous mechanics more and incorporated that in their game. In fact, famous tabletop players loved and chose Pathfinder rather than the fourth edition of Dungeons & Dragons, which is why even the new gamers looked forward towards Pathfinder. The game lets you choose from a big bunch of races, and offers fascinating skills, monsters and enemies. 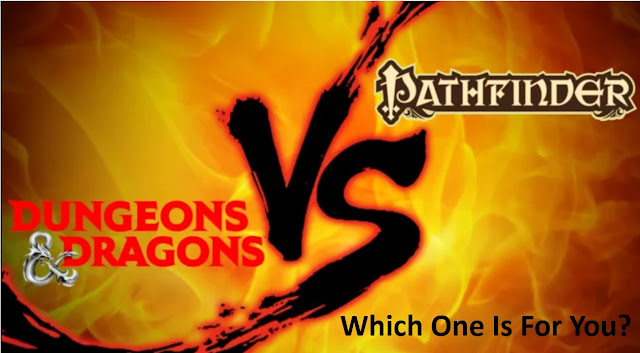 New Editions Of Both The Games

Like Dungeons & Dragons edition four failed miserably, the makers started with the fifth edition to overcome the loss of failure. The makers developed the fifth edition of Dungeons & Dragons with straightforward mechanics for any gamer to catch up with it. They also changed the addition and subtraction system of ability checks into an advantages and disadvantages system. This way, the makers refined the game with simple mechanics without disappointing the players.

Dungeons & Dragons’ fifth edition is the first in its series that depends on the players’ united thinking capacity. It entirely depends upon the player if they want to use a grid and figurines or not. Hence the game is suitable for both beginners and veterans.

No doubt, Pathfinder is still the favorite of those who like simple gameplay and but higher complexity, but the fifth edition soon built a wholly new and vast kind of audience base. Hence, Paizo came up with the second edition of Pathfinder.  The second edition did not add some big new things but groomed the game’s existing factors. It focused singly on what players already loved in the game.

Before making a choice, you first need to decide what your expectations are from the game. If you want imaginative gameplay with accessible content and rules, then go with Dungeons & Dragons’ fifth edition as it will suit you the best. On the other hand, if you want to be involved in a game with complexity and customization options, Pathfinder is right for you.

Both of these RPG games are fun and while new players mostly go for the fifth edition of Dungeons & Dragons, old school tabletop game fans go for Pathfinder. Both these games involve calculations and math; therefore, you need to decide how much you can go on with the calculations while living your fantasy game world.

8. What Is Blockchain Game Development And How Do You Get Started?
Author: Patricia Smith

9. How Much Does It Cost To Make A 3d Nft Game?
Author: Innosoft Group