Security Vulnerabilities In React And Standard Practices To Overcome Them! 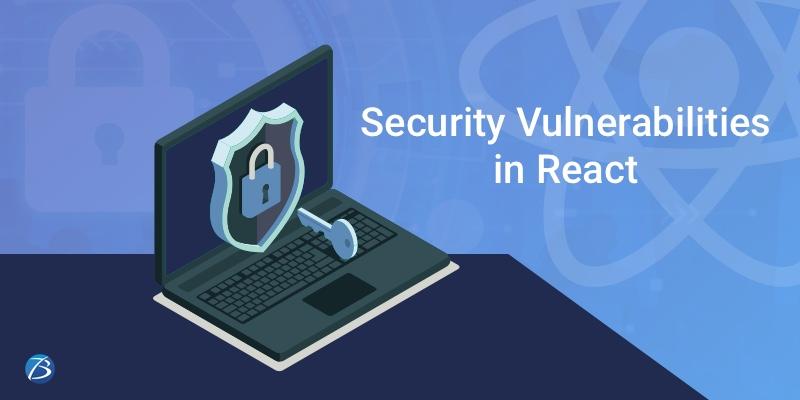 Released in 2013, React, a robust front-end web library, became quickly popular amongst technical professionals worldwide. Today, React is extensively being used by giants like Netflix, Facebook, Instagram, BBC, Whatsapp, and many more, owing to the myriad advantages it offers, as listed below:

• Synchronization of app and interface status

long with these goodies, React is also considered to be a highly secure technology due to the availability of several in-built protective mechanisms.
Yet, some vulnerabilities can occur in the React apps and lead to unpredictable security leaks; which the React app development services must be aware of.

So, this blog will take you all through some common security flaws in React and guide you with the potential solutions as well. Let’s get started. 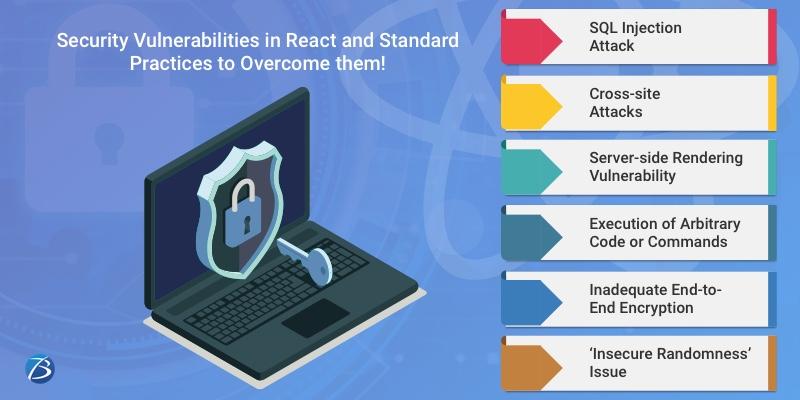 This is another type of attack where the attackers can play with the user’s data regardless of their knowledge and approval. The attackers can extract sensitive user data, create new user credentials, replicate fake credentials, and thus, get admin authorities for accessing the server. SQL injections are of several types viz. time-based, logic-based, error-based, etc.

• For time-based SQL injection, conducting timely validation of the schema for getting rid of the suspicious code injections

Cross-site scripting attack is a common yet serious security flaw that React Apps have to go through. It occurs when the attackers or hackers trick a website by executing an arbitrary JavaScript code. These attacks are of two types- stored attack and reflected attack.

1. Stored cross-site attack: in these, the attacker accesses the server and extracts the data from the client’s web page when the code is executed.

2. Reflected cross-site attack: in these attacks, the attackers place a link with sensitive user information that will run in the browser.

Cross-site scripting can be performed only when the code execution is done in a browser with some particular instructions. So the mark-up that holds the instructions for code execution needs to be disabled by the React app developers.

In case a React app developer renders an application from the server-side, the server-side rendering attack is likely to take place. It can lead to the unknown monitoring of the application, data leakages, etc. This issue is quite difficult to detect when context. Data is not found properly.

Execution of Arbitrary Code or Commands

When the attackers run the arbitrary codes or commands on a particular process, application can get highly vulnerable. It usually takes place in the software or the hardware that processes the arbitrary code. ‘Arbitrary code execution exploit’- a special program is used for this security issue and if it gets exposed to public products and services, it can expose the data of all the concerned individuals who buy and use those products and services.

Lacking end-to-end encryption is the major cause of security lapses and data breaches occurring in the React apps. The inclusion of third-party APIs also leads to these issues affecting the safety and privacy of data.

• utilization of private and public-key encryption

This issue takes place when the attackers add a malicious code that begins with JavaScript or a link in the apps. This script runs in the browsers as soon as the users click the planted link. Thus, attackers get the admin authority and they can pull sensitive data or alter the data and hence makes the application very insecure. Also, they get control over the uniform resource identifier and several elements in the apps are vulnerable to threats.

• isolating the code from other codes

Diverse security vulnerabilities can occur in the React apps and identifying their reasons can be impossible at times. Hence, the React app development services can proactively follow some preventive actions as below:

• Install and configure Linters to automatically detect the security lapses in code and provide remedial advice.

• In the past, some versions of React Library possessed high-risk vulnerabilities, however, they have been removed in the latest versions. Hence, it is a good practice to use the updated version always.

• Some dependencies and third-party components may be more prone to security issues and so using their latest versions is recommended.

• Zip Slip issue crops up due to the overwritten arbitrary files along with the directory transversal issue. For this, the developers can either use fixed versions of the archive processing libraries or can utilize a dependency vulnerability checking tool like Snyk.

• Library codes are used for threatening operations like inserting HTML into the DOM. Developers should avoid libraries that use unsafe patterns like ‘innerHTML’ and ‘dangerouslySetInnerHTML’ or other unvalidated URLs.

• It is necessary to avoid suspicious or dangerous URLs. For avoiding URL-based script injection, use validation, and ensure that the used links are ‘https:’ or ‘http:’

In today’s digital era, the security of software apps holds monumental importance. Security lapses can result in data leaks and high-risk cyber-crimes. So, it is essential to consider the security pitfalls right from the initial stages of React app development. The developers and the quality analysts as well should keep an eye on such vulnerabilities and eliminate them from time-to-time.

All this requires not only the knowledge and experience of the development teams but also needs attention to details and thoughtful decision-making when these vulnerabilities crop-up.

Also, have a glance at our blog here for gaining insights on general security tips in mobile applications.

I hope it was insightful and will benefit several React app developers in their projects.

Please comment in the below section and let us know about any other security vulnerabilities you faced in React app development.

14. Extending Norton Antivirus Protection By Transferring It To Another Device
Author: Angel Smith

15. Do You Need Antivirus Software In Windows 10 Despite Defender?
Author: Angel Smith