Actress Nicole Kidman will be featured in director Robert Eggers’ next movie, The Northman. Kidman shared that she is terrified.Nicole Mary Kidman is an American-Australian actress. She is awarded by Academy Award, four Golden Globe Awards, one Primetime Emmy Awards for her various acting performances. She was also listed as one of the world’s highest-paid actresses in 2006, 2018, and 2019.Source:https://directory-boom.uk.com/blog/nicole-kidman-is-scared-by-robert-eggers-new-film/Kidman started her acting career in Australia with BMX Bandits and Bush Christmas projects and featured in movies like Batman Forever, Far and Away, To Die For, and  Eyes Wide Shut.Kidman also featured in HBO TV shows including, biopic  Hemingway & Gellhorn, drama series  Big Little Lies, and drama series Top of the Lake: China Girl.Robert Eggers’ The ...
... Northman is an upcoming American revenge movie. He also co-wrote the screenplay with Sjón. The film is set in 10th century Iceland. It stars Nicole Kidman, Alexander Skarsgård, Anya Taylor-Joy (The Witch), Willem Dafoe (The Lighthouse), and Ethan Hawke.The shooting of the movie started in March but halted due to the pandemic COVID-19. It then resumed in August 2020. 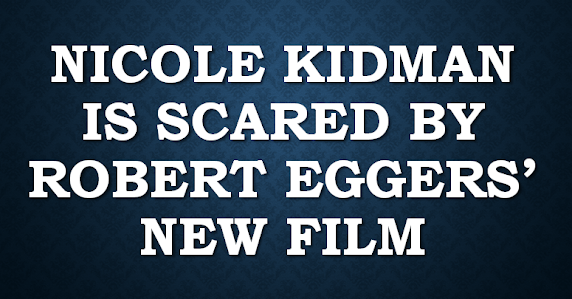 In a recent interview with Collider, Kidman shared about her new show, The Undoing. She revealed that she is terrified despite her calm appearance. Kidman also shared that being terrified might not be bad, as some of her best work comes when she is scared. And according to her, the fear helps her to jump into the character boldly.Kidman’s full quote was, she is terrified now. She might sound calm, but she can not explain what is going on inside her. She added that she often makes bold and spontaneous decisions with very little thought and caution.The American director and screenplay writer Robert Neil Eggers is known for his critically acclaimed and award-winning psychological horror, The Lighthouse, and fantasy horror, The Witch. Based on his script Eggers made his directorial debut with the recently released The Witch. The film collected a gross of $40 million at the box office against a $4 million budget.He then also wrote and directed Robert Pattinson starred in The Lighthouse in collaboration with his brother Max Eggers. Both films got an approval rating of 90% on Rotten Tomatoes.However, his upcoming film The Northman is different from his previous horror genre. The movie’s plot revolves around a revenge tale in which the character of Skarsgård tries to avenge his father’s death.Kidman has many reasons to be scared other than the storyline. Coronavirus might be one of the reasons, as people are getting positive COVID-19 tests on sets. Apart from that, Eggers is known for pushing the actor’s limits to get insane performances out of them. The storyline of The Northman may seem a little simple and easy on paper, and it might contain several twists and turns that audiences are not yet aware of.The Oscar-winning actress has enough reason to be terrified. Eggers’ previous projects are breathtaking and left audiences with unsettling visuals. And the audience can expect some eye-opening and gut-wrenching visuals. The involvement of Eggers assures that the story will undoubtedly be bloody. However, Kidman has fair experience working in horror movies; she featured in the critically acclaimed The Others. So there is nothing Eggers has that she is not prepared for.Zoila Sims is a modern personality who has been writing blogs and articles about cyber security. She writes about the present day updates involving mcafee.com/activate and how it can beautify the work experience of users. Her articles have been posted in many well-known e-magazines, blogs and websites.