The Addams Family Will Make A Return In 2021

Get ready to welcome the Addams on Halloween next year.The second part of the horror-comedy animated blockbuster “The Addams Family” will arrive around the time of Halloween in 2021. The sequel titled “The Addams Family 2” is expected to be more stellar than the first film as some new exciting talent has been added in the team of voice overs which include Bill Hader who is expected to give his voice to the character “Cyrus” as well as Javon “Wanna” Walton who is expected to perform the role of the youngest sibling in the family-“Pugsley.”Source:https://directory-boom.uk.com/blog/the-addams-family-will-make-a-return-in-2021/The two fan favorites will be joining in an already powerhouse of a star-studded cast. The first film saw Charlize Theron leading the line with her character Morticia. She was supported by Oscar Isaac who donned the character Gomez, Chloe Grace Moretz who played the role of Wednesday, Nick Kroll  as Fester, ...
... Bette Midler who was the “Grandma,” and iconic singer Snoop Dogg giving his voice for “It.”The official release date has been set for an October the 8th release date. Renowned animator, Greg Tiernan will return to helm the project.Tiernan made a statement about the sequel in which he said that the legacy of the Addams Family ensured the success of the first family. 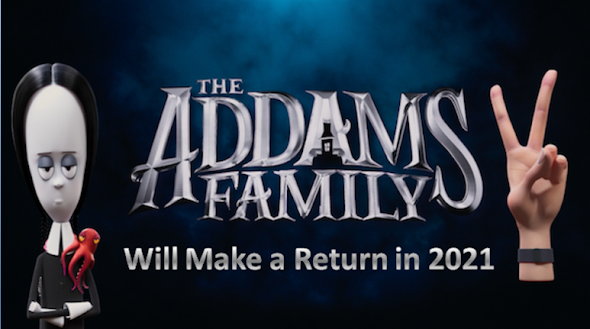 He also welcomed the new additions in the cast Bill Hader and Javon Walton in whom he fully trusts to be the new catalyst for the success of the exciting second chapter in the story of Addams Family.In case you didn’t know, the creators of the film have also offered a new exciting opportunity for the fans of Addams Family to voice an unnamed character in the second film. Those who wish to participate and want to know more about the contest can visit the page-www.AddamsVoiceChallange.com. You will find all the details and also the procedures to apply for the contest.The new film is also expected to feature the old school comedic murkiness of the family as they run into unsuspecting characters which will set the show for a belly-laughter ride. The project is being overseen by Gail Berman, Conrad Vernon, Danielle Sterling, and Alison O’Brien. Kevin Pavlovic and Laura Brousseau will support Tiernan in the direction work while Cassidy Lange, Jonathan Glickman, and Andrew Mittman will serve as executive producers.  So now it is only a matter of another year to see what the Addams family has in store for us.Zoila Sims is a modern personality who has been writing blogs and articles about cyber security. She writes about the present day updates involving mcafee.com/activate and how it can beautify the work experience of users. Her articles have been posted in many well-known e-magazines, blogs and websites.

3. Oracle To Mysql Makes The Data Easy To Access One!
Author: Dbload

5. 12 Biggest Mistakes To Avoid When Building A Smart Home Or A Home Cinema
Author: Smart Home

9. How To Optimize Your Warranty Management System
Author: NeuroWarranty

10. Here's Why You Should Automate Your Home Now
Author: Home Automation

13. What Is The Big Data?
Author: IvaluePlus

15. Cleaning Made Possible With Specialis Water Treatment Before Releasing It Into Other Water Bodies
Author: George Hartley