In Attack on Titans, there is no character quite like Levi Ackerman. He is a complex character, and as Humanity’s Strongest, his dexterity has proved to be a curse as much as it has been the reason for the blessings. But many things that happened in the past make him much more than just the Survey Corps Captain. Season 3 of the show delves deep into his painful unexplored history. The No Regrets manga goes back to the days when he used to be a criminal in the Underground and how he later was inducted in the Survey Corps. It does a spectacular job of covering the tragedies in his life, which ultimately shape some of his crucial decisions on the show.Season 3 explores the lack of familial bonds in Levi’s life. His mother was a sex worker who died when he was young. When his uncle Kenny found him, he didn’t give him the love and care Levi deserved. Kenny soon abandoned Levi in a world of criminals to fend for himself. But this condition is not an aberration in the cruel world of Attack on Titans as children without families were a common sight. But Levi was no ordinary child. He had excellent combat skills, which earned him ...
... notoriety and company in the dark and unforgiving world. His notoriety got the attention of Furlan Church, and after many failed attempts of establishing a relationship, Furlan became the first person Levi can trust. With their partnership, they started a small gang of their own.A few years later, they met Isabel Magnolia, who joined their gang. She soon won their trust and started living with them. Apart from being a loyal friend, she proved to be an asset for the gang by becoming only the third member of the group to master 3D maneuver gear. For Levi, both Isabel and Furlan were like family, and he was never as happy with the Survey Corps as he was with them. They became the family he never had.Their gang became well-renowned with time as their skills with 3D maneuvers were impeccable. But the three of them were not satisfied with their Underground life as they dreamt of going to Eldia. This was an impossible task since the people of the Underground were not considered citizens. Even if they managed to trick the military blockades somehow, they would be sent back to the Underground sooner or later. But they get a chance to do the impossible when a politician offers them Eldia’s citizenship in exchange for infiltrating the Survey Corps to steal documents from Erwin Smith.But their plan fails as they are exempt from the Survey Corps training because of their exceptional skills. Before they even get a chance to steal the documents, they are sent to survey the wilderness beyond the walls. Their expedition takes an ugly turn when they are ambushed by the Titans, who successfully separate their forces during a heavy rainstorm. Levi had ridden beyond the walls with Furlan and Isabel by his side, but the unprecedented events that unfolded caused a significant loss, and he returned alone.Levi had joined the Survey Corps to get the citizenship of Eldia, not because he believed in their ideals. He wanted to live under the blue skies far from the Underground with his friends Furlan and Isabel. But all his dreams died with them. He resolved to kill every Titan he encountered to avenge the loss of his friends. He remained as a part of the Survey Corps and witnessed his companions’ deaths until Eren Jaeger joined up. 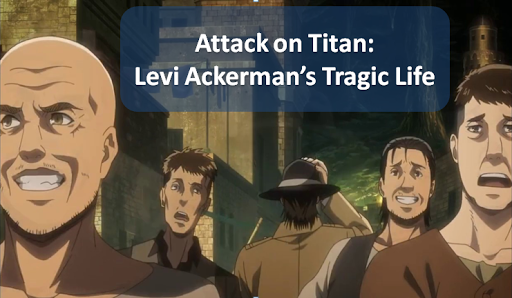 Irrespective of how many years passed, the death of Furlan and Isabel remained with Levi. He never discussed his personal life with anyone, but that does not mean that his decisions were not a direct consequence of what had happened with his friends. Some of the decisions that clearly show his past influence are his advice to Eren and the decision to save Armin over Erwin. His decision making was radically affected by the ghosts of his past life. He was never able to reconcile with the loss of his friends who were like family to him. His advice to Eren in the Forest of Giant Trees to either follow the Survey Corps’ plan or fight the Female Titan is quite like the choice he had to make years ago. He, too, had to choose either to believe the Survey Corps’ plans or to stand by his squad to fight the Titans himself. He followed the strategy of Survey Corps to fight and went alone, leaving his team behind. That unfortunate decision resulted in the deaths of his friends Furlan and Isabel. He encourages Eren to make the choice he wants to make and to believe in himself. But unfortunately, they end up making the same mistake Levi had made years ago, which they would regret later.The tragedies of his past life also influenced the decision to save Armin over Erwin. Levi has lived a callous life; he knows the pain of losing a loved one like no one else. The type of world he grew up in gave him an upbringing in which anyone would have lost the ability to empathize. But that’s something that sets him apart. Even though he grew up in a harsh world, he has remained compassionate, which makes him very special. The tragedies have, without a doubt, affected his decision making as he struggles to get over them, but they have failed to take his empathy and compassion away.Zoila Sims is a modern personality who has been writing blogs and articles about cyber security. She writes about the present day updates involving mcafee.com/activate and how it can beautify the work experience of users. Her articles have been posted in many well-known e-magazines, blogs and websites.Source:https://mcafee5.uk.com/attack-on-titan-levi-ackermans-tragic-life/

15. Erection Problem? This One Medication Kamagra Gold Will Fix It
Author: thomas brown