Boruto Framed For Murder! Everything You Need To Know

In the previous episode, “To the Land of Silence,” Boruto’s Team 7 investigated the Black market where Harshirama’s Cell was being traded and confronted various shocking revelations. They find out about the Ninja Alliance’s incompetency and the devastating aftermath of the Great Shinobi World War for the smaller nations. As if that was not enough, they get to see many wanted criminals roaming freely in the Land of Silence even though the Ninja Alliance is well aware of them. These events were undoubtedly shocking, but what happened in Episode 161, “The Castle of Nightmares,” is going to make all of this trivial. As Naruto’s son, Boruto is suspected of murdering the Queen. Boruto and Konohamaru meet up with a secretive butler after Boruto had used his jutsu on the reprobate ninja Kirisaki. They realize that the mysterious butler has bought the DNA of Hashirama for his employer, who expects to become immortal by using it. Now Konohamaru is disguised as Kirisaki to win the trust of the butler while Boruto pretends to be his assistant. He relents to take Konohamaru and Boruto to meet his employer. Still, Konohamaru ...
... threatens to walk away if he does not reveal the employer’s identity. The mysterious butler acquiesces and tells them that he works for Queen Sakuya, for whose sake he is even willing to die. He also informs them that they can only enter the castle with his help because it is protected by a barrier. When they arrive at the castle, the butler realizes that someone tried to break in, and has been killed by the barrier. He then orders others to make sure that the trespasser’s body is disposed of outside the village. When they enter, Boruto notices that all the mirrors are shattered. The butler explains that Sakuya hates to even see her own reflection. Before he leaves, the butler restrains Boruto using the castle’s traps. He wants Konohamaru to do the procedure first with Boruto. Konohamaru pretends to want a drink to steady his hands to trick the butler. When he leaves, Konohamaru asks Boruto to retrieve the Hashirama Cell, leaving a clone in the trap behind. 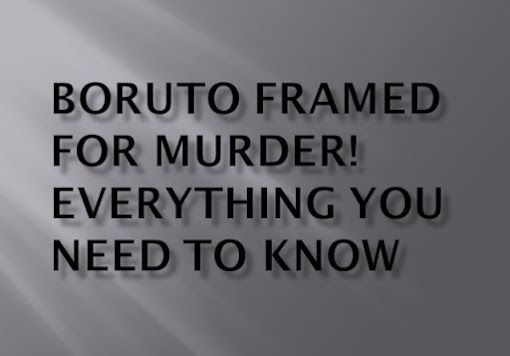 Before starting the procedure, Konohamaru asks the butler the origins of the Hashirama Cells. The butler explains that they bought it from a rogue medical firm researcher. At the same time, Boruto takes down the Queen’s guards outside her chamber. But when he enters, he is surprised to find out that the Queen is dead with a kunai on her back. He is surprised to see the murderers right there at the scene of the crime. They also have stolen the Hashirama Cell and try to make it seem as if Boruto has murdered the Queen, Sakuya. When the butler tries to alert the castle, one of the pink-haired assassins kills him, after which they also kill other castle staff and dismantle the barrier. As they flee, one of the killers shouts that Konoha shinobi have murdered the Queen, Sakuya, to make matters worse for both Boruto and Konohamaru. Konohamaru, disguised as Kirisaki, realizes how bad things are turning out for him and Boruto. The citizens who hear about the murder of the Queen rush to the castle thirsty for blood and vengeance. Boruto and Konohamaru have the royal guards chasing them and the citizens who want to spill their blood. In a situation this desperate, it will be very tough not to draw blood. For that, both Mugino and Sarada will need to intervene sagaciously to make sure that something terrible does not transpire. It’s a very complicated situation for Boruto now. He will have to keep his family’s reputation intact and come out as innocent before the situation gets worse for Konoha diplomatically. Cynthia Strickland is a innovative character who has been writing blogs and articles about cyber security. She writes about the state-of-the-art updates involving mcafee.com/activate and how it can enhance the work ride of users. Her articles have been posted in many famous e-magazines, blogs and websites.Source:https://6activate.com/boruto-framed-for-murder-everything-you-need-to-know/

2. Best Gaming Accessories You Should Have In 2021
Author: Angel Smith

15. Here’s How You Can Get Rid Of Split Screen On Ipados15
Author: Angel Smith