Black Adam: Dwayne Johnson Says Hawkgirl Will Not Be A Part Of The Upcoming Feature Film

Dwayne Johnson was cast as the supervillain Black Adam way back in 2014. However, there was no news on the official release date for quite some time until in 2019 Black Adam got an official release date for December 2021. The feature film in the DC Extended Universe will also feature Noah Centineo as Atom Smasher, a member of the Justice Society of America.Dwayne Johnson said that the character of Hawkgirl would not be included in the Black Adam movie. In DC’s virtual FanDome event, the Hollywood actor talked about a concept art-based trailer focusing on the origins of Black Adam. He further said that other characters to be included in the film would be Doctor Fate, Cyclone, and Hawkman. All three characters are also a part of the Justice Society of America.Dwayne Johnson Does not Elaborate on the Reason Behind Hawkgirl’s Absence from Black AdamResponding to a fan’s question, Dwayne Johnson said that ...
... even though Hawkgirl was a part of the original Justice Society of America team, she was not part of the movie because of a few things that happened behind the scenes and stopped her from being a part of Black Adam. However, Johnson did not elaborate on that statement. He said that Cyclone would be a part of the film, further adding that whatever happened was maybe meant to be.As of now, Dwayne Johnson and Noah Centineo have been confirmed for Black Adam. There is still no clarity who would play the characters of the JSA members. DC’s FanDome event would have been the perfect opportunity to introduce other characters of the film, but the fans will have to wait till there is an official statement. Jaume Collet Serra will direct the movie. 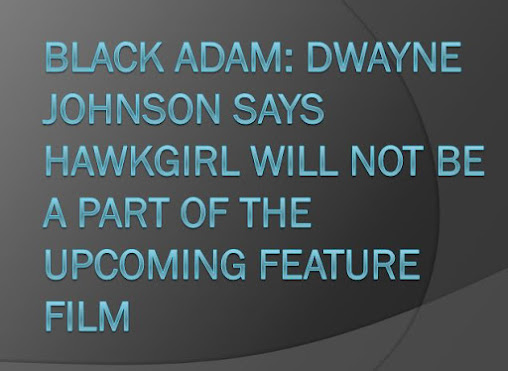 Noah Centineo to Star as Atom Smasher in Black AdamAlbert “Al” Rothstein also known as Atom Smasher first featured in All-Star Squadron #25 in September 1983. The fictional character is the grandson of supervillain Cyclotron. In his life as a superhero, he inherited Cyclotron’s superpowers and Justice Society of America founder The Atom’s quality of morality, and he went on to become one of the founding members of Infinity Inc. This group of superheroes comprised children and students of the Justice Society of America.Black Adam: DC Comics Anti-HeroBlack Adam is an antihero appearing in DC Comics. Otto Binder and CC Beck created it. The fictional character has been portrayed as an enemy of Shazam. Black Adam first featured in December 1945 in the first edition of Fawcett Comics’ The Marvel Family Comic Book. Black Adam was later brought back to life after DC Comics acquired the license of the Fawcett characters and began publishing stories in the 1970s.Black Adam: Shazam’s Evil EnemyBlack Adam was introduced to the DC Comics Universe in 1994 in The Power of Shazam! He is portrayed as an evil and dangerous character in the ongoing Power of Shazam series. The evil character is the son of an ancient Egyptian Pharaoh Ramesses II. He goes on to impress the wizard Shazam and receives the gift of becoming a “superhero” by speaking out the word Shazam. Shazam is an acronym for Adam’s powers. Shu (Stamina), Heru (Swiftness), Amon (Strength), Zehuti (Wisdom), Aton (Power), Mehen (Courage). The character has appeared in cinematic ventures such as a short animated film Superman/Shazam!: The Return of Black Adam. He has also appeared in Lego DC: Shazam!: Magic and Monsters.Black Adam has been a playable character in DC Unchained, Injustice: Gods Among Us and Injustice 2, a fighting video game based on the DC Universe. Injustice 2 is available on Android, PlayStation 4, Xbox One, Microsoft Windows, and iOS.DC tastes success with Shazam and Aquaman. So, it is a matter of time before Black Adam comes to a cinema near you and tries to create the same magic amongst the movie-going audience.Zoila Sims is a modern personality who has been writing blogs and articles about cyber security. She writes about the present day updates involving mcafee.com/activate and how it can beautify the work experience of users. Her articles have been posted in many well-known e-magazines, blogs and websites.Source:https://mcafee5.uk.com/black-adam-dwayne-johnson/

1. What Different Styles Of Photography Does The Wedding Photographer Offer?
Author: Vishal Gupta

3. How To Apply For Passport
Author: itzeazy

6. Fast Casual Cuisine From All Over The Mediterranean
Author: George Krishton

9. Why It Is Advisable To Spend Time On Market Research?
Author: braydenbrennan

12. 4 Benefits Of Pursuing A Career In Finance And Accounting
Author: Sanem lan

14. Essential Tips To Keep In Mind While Looking To Hire A Company For Rendering
Author: James Spencer

15. Best Adjustable Bed: What To Look For
Author: George Krishton