The Devil All The Time: Netflix Offers Us A Glimpse Of The Upcoming Psychological Thriller

Source: https://5morton.com/the-devil-all-the-time-netflix-offers-psychological-thriller/Psychological thriller The Devil All the Time is all set to release an online video streaming giant Netflix. The release date of the film is September 16, 2020. However, a few released stills from the upcoming movie give us a glimpse into what characters are portrayed by different actors in the film.According to pictures uploaded by Netflix US on their official Instagram account, we get to know more about the roles of Tom Holland, Robert Pattinson, Jason Clarke, Riley Keough, Bill Skarsgard, and a child with him in the picture.A Glimpse into the Characters of The Devil All the TimeThe first picture showcases Tom Holland sitting in a car.
He plays the character of a young man Arvin Russell who is devoted to protecting his loved ones in this midwestern gothic tale. The still shows Holland staring out the window looking at something or someone. He also has a bruised cheek right under his eye. The denim jacket and longer hair give Holland a rugged look.As you scroll through, you will come across Robert Pattinson’s still from the movie. It is evident that the backdrop is of a church, and Pattinson is essaying the role of a priest named Preston Teagardin. We can also see a book in his hand, which is probably the bible. Sitting on one of the pews in the church, the actor is pictured, giving a grim look that might give away his character’s nature.Jason Clarke and Riley Keough play the role of Carl Henderson and Sandy Henderson. It is not clear what the relationship is between the characters, but they might be a couple or siblings. The official still from the movie showcases both of them sitting in a car.The final picture of the lot showcases Bill Skarsgard and a kid leaning on a log of wood with hands folded in the middle of a forest. 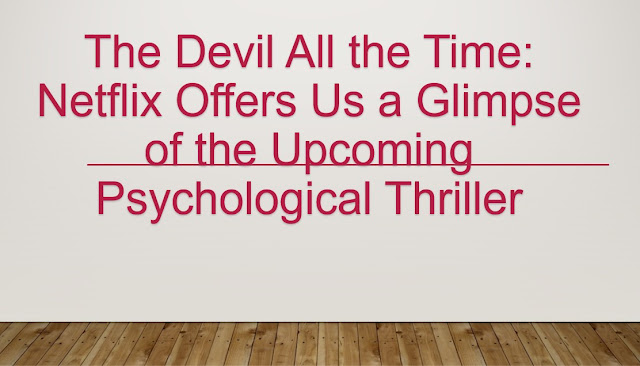 The Movie Is Backed by a Strong CastOther members of the cast include Harry Melling (Roy Laferty), known for his roles in Harry Potter, The Old Guard, Mia Wasikowska (Helen Hatton). Eliza Scanlen will be portraying the character of Lenora Laferty.  The Devil All the Time also features Sebastian Stan. The latter is famous for his role as the Winter Soldier in Captain America: Winter Soldier, Captain America: Civil War and Avengers: Infinity War and Endgame.The Devil All the Time: A Psychological Thriller Book AdaptationThe Devil All the Time is an American psychological thriller film based on the novel of the same name. American author Donald Ray Pollock has written the book. The movie adaptation has been directed by Antonio Campos. He has also written the screenplay along with Paulo Campos. The upcoming film has been produced by Randall Poster and Jake Gyllenhaal.The plot of the film is set in the state of Ohio. It revolves around a period between the end of World War ll and the Vietnam War. The film follows a non-linear storyline of a few people who are disturbed and suffer from the psychological aftermath of the post-war period and crime.

1. Here’s How You Can Set Up Family Sharing Feature On Iphone, Ipad, And Mac
Author: Jack thomson

7. How Can Entrepreneurs Get The Best Output From Their Developers?
Author: Neelima

8. How Can Your Ipad Be Damaged And What Are The Solutions?
Author: Charlie Wollstonecraft

11. Best Smartwatches You Can Buy Under $200
Author: elina john

12. What Is An Oleophobic Coating?
Author: Ryan