In the third episode of the extremely popular show, ‘Hanna’, the protagonist Hanna tries to discover the area where The Meadows is located.
She desperately wants to save her close friend Clara from the operatives of UTRAX. Right now the only way she can do this was by investigating Passway, which is a pharmaceutical corporation that carries out clinical tests. The excitement comes when she finds out that an employee of Passway has a delivery of implants to make for the trainees of all-new UTRAX operation. This is when she decides to follow him, as she believes that this will probably lead her to the new location of The Meadows, and help her get to Clara.

Hanna’s only ally, Marissa agrees to help, hesitatingly, and arranges a passport for Clara as well. Not just this, she also establishes a connection with one of the CIA operatives, who was on Carmichael’s payroll and was following Hanna. They found out that Hanna was alive and that she was the one who had broken into Passway a few days ago. However, Marissa always lied and never opened up to Carmichael about Hanna. She even went out of her reach to help Hanna track the shipment that was headed for The Meadows. But, when she and Hanna were waiting to get on the ship, Marissa got a call from Carmichael and had to step out of her car.

While Marissa was on call, Hanna decides to skim through Marissa’s bag as she notices how worried Marissa got about Hanna being near her bag. This is when she finds out the visiting card that Carmichael had given Marissa and she also sees same the number as the recent contacts on Marissa’s car. Due to this, Hanna gets extremely suspicious about Carmichael and she decides to run away from Marissa. She even beats up Marissa and abandons in a bloody and bruised state. Marissa doesn’t understand anything and wonders why Hanna alienates herself from the only ally she had. 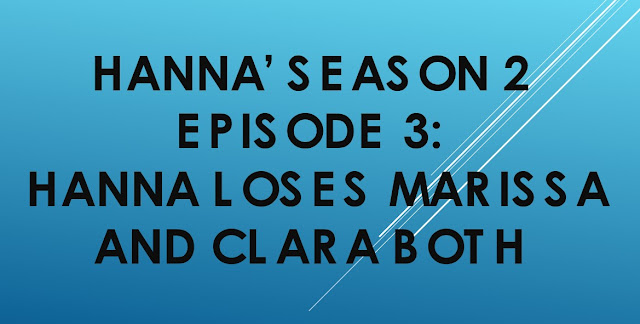 After abandoning Marissa, Hanna follows the shipment to the location of The Meadows. She hides the passports in a tree around The Meadows facility and decides to break in and free Clara. But, Hanna is unaware of the fact that by now UTRAX has Clara convinced that The Meadows is the best place for her to be. They gave her a family, an identity, and assured her about safety. Clara had lived without all these for years and that was exactly what she wanted. This is why UTRAX became successful in retaining her.

The Meadows also gives Clara a letter to read that was written by her mother when she was born. All these changes Clara’s mind about The Meadows. By now, Clara has started considering The Meadows as her home. While trying to rescue her, Hanna looks at Clara and realizes that coming to rescue her was a big mistake. Hanna always believed Clara to be someone just like her, who was trying to prove the fate of being a trained killer as wrongdoing. But this big change in Clara leaves Hanna shocked. While she was encircled by all these thoughts, she gets into the hands of the guards at The Meadows. Towards the end of the episode, Hanna loses her friend and her only ally. It will be thrilling to see what more is to come. Stream all episodes of Hanna on Amazon Prime Video.

1. How To Use And Collapse Tab Groups In Google Chrome
Author: Angel Smith

2. How To Fix Sound Problems On Mac
Author: Angel Smith

5. How To Prevent Gophers And Bats From Entering House? Latest Natural And Easy Ways You Must Try
Author: Blakes Wildlife

6. Is Dedicated Web Hosting Propitious Enough For You To Befit?
Author: Navicosoft

7. Be Yourself When You Are In Presentation Deck
Author: Franco Sapling

8. Apprehend The Extremities To Get Web Hosting For A School Website
Author: Navicosoft

9. Small Event Venues For A Celebration Of A Lifetime
Author: Zack

11. Satellite Internet Provider In Africa - How Does It Work?
Author: Afrikanet Oxford Consultech

12. How To Change Ads Settings Of Your Google Account
Author: Jack thomson

13. How To Get Rid Of Viruses From Android
Author: Jack thomson