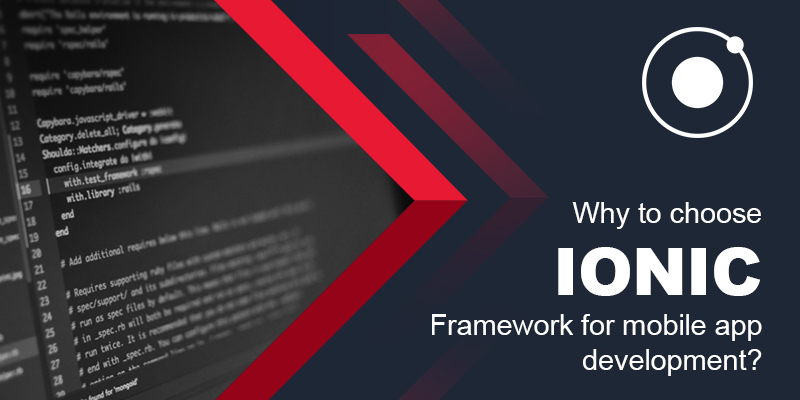 What is IONIC Framework?
IONIC is an open-source framework built using Angular JS, HTML and CSS on PhoneGap/Cordova. It is used to build hybrid mobile, Progressive web and Desktop apps using HTML5, CSS and JavaScript. These apps use single code-base for different platform like iOS, Android, Windows etc. Using this framework, the developers can build highly advanced apps with 120+ modules like Camera, Photos Gallery, WiFi, Bluetooth Network, SMS, etc. This framework uses HTML sanitation, Angular’s touch recognizers, animation logic and asynchronous communication for app development. IONIC is a one-stop solution for building apps that have an excellent look, classy feel and a great orientation.
IONIC mobile app development services are growing across the world, due to the immense benefits that this platform offers. Let’s go through the reasons why one should choose the IONIC framework ...
... for mobile app development.

Top Benefits of IONIC Framework
Open-source and free
IONIC is a completely free and open-source platform available on GitHub; this is its best advantage to the IONIC mobile app development services fraternity. While using an open-source platform, one of the drawbacks that developers face is the instability of the platform. However, in spite of being open-source, IONIC is highly stable and widely used platform. IONIC apps can be customized to exquisite appearances on different mobile operating systems while being cost-effective.
Performance-based framework
IONIC is built on top of AngularJS which provides several useful functionalities for developing hybrid apps. It provides a structure for making the programming more manageable by extending the HTML syntax. Also, it supports two-way data binding due to which every change in the UI immediately reflects in the underlying data model.
Single code-base across different platforms
IONIC allows building of high-end user interfaces while using the same code to build applications for different platforms. The programming languages that IONIC framework uses are easily converted from one operating system to another which allows the app to be used across different platforms. If one was to go for a native language instead of hybrid, more efforts and money would be required to learn particular languages for every platform.
Easy testing of apps
Testing the apps is far easier with IONIC. One can test the apps not only on a desktop browser but even perform simulator testing using Cordova commands for both, Android and iOS apps. One can even test the apps by remote debugging.
Huge community to help
If one starts the app development process with a new framework, even the expert developers face challenges. However, IONIC has the advantage of a huge community support. IONIC framework is built with well-known technologies like Angular and Cordova and has the support of a strong active community. There are forums and blog posts already available for the IONIC app developers and members of the community to assist them when needed.

Why should you hire IONIC app developers from Biz4Solutions?
There are a plethora of benefits that IONIC framework offers. It has made the programming quite easier for the developers. The exquisite designs and free working space that IONIC provides makes the apps highly attractive. So, explore your creativity with this framework and develop an outstanding app for your business.
Biz4Solutions is a leading IONIC mobile app development company, based in Texas. We have a large portfolio of hybrid apps and a team of developers having expertise in IONIC. Our team understands the significance of IONIC for building highly interactive hybrid apps. We are professional, time-bound and have rich experience in serving several industries with world-class apps. Hire IONIC app developers from Biz4Solutions for your next app.
Contact us to know more!

7. Have Aadhar? Get Esignatures Too! | Drysign By Exela
Author: DrySign Author

9. How Esignatures Can Accelerate Growth For Enterprises | Drysign By Exela
Author: DrySign Author

12. The Potential Impact Of Electric Vehicles And Electrification On Global Energy Industries
Author: Ariespro IT